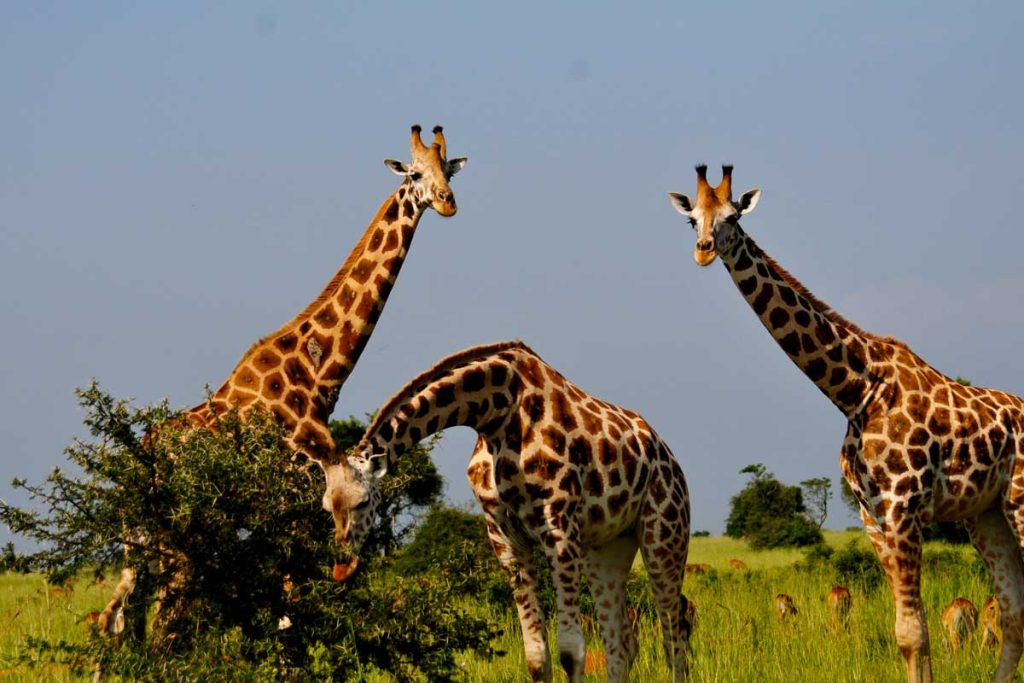 Game drive experience in Murchison Falls National Park; Game drive or Game Safari experience is one of the numerous and commonest ways to explore the immensely large Murchison Falls National Park. Game drives are done in the comfort of a safari/tour vehicle following established tracks. As you drive through these tracks, the African jungle comes live right before your eyes, how cool that is!! While some animals, especially the grazers, may seem not bothered by the passing vehicle, others will flee to some hideouts. Carnivores chasing for their prey is the most sought-for jungle scene by most visitors on a Wildlife Safari to African savannah parks. It’s the Game drives that shall position you well for such and more of nature’s surprising moments. Moreover the park’s landscape is so perfect for game drives besides the eye candy scenery that makes the drives beautiful and breath-taking.

Best game drive areas/spots in Murchison Falls National Park
The most rewarding and successful game drive is that done at the north of the park although the south too is open for the same. The savannah and woodland ecosystem to the north supports a large and wider variety of wildlife compared to the south that is dominated by forests.
There are 3 prime areas of interest for game drives on the northern sector. The best for viewing animals is the Buligi circuit which includes the Buligi, Victoria Nile, Queen’s and Albert Nile tracks. The Pakuba track is an extension to the Buligi track and offer better chances for Leopards sightings though more other animals can as well be spotted.
Areas like Chobe have fewer animals but are mostly good for nature walks and great views of the Nile River. The Nyamsika gorge attracts lions, buffaloes and some water animals.
Apart from the primates, in the south, are some antelopes plus the giraffes that were translocated there in 2016 to enhance tour activities in the then newly established honeymoon track.

Best(recommended) time for game drives in Murchison Falls National Park
If not for some park rules and the natural factors that hinder game drive activities at particular times of the day, game drives can be done throughout the year and any time of the day. It should also be noted that the main attraction and purpose for the game drive is the prospect of capturing some wildlife scenarios. This can be achieved when the jungles are visited at a time when animals are more active and that is early mornings at 6.30am and evenings from 4.30pm. At such times, the good weather, particularly the lowered temperatures will see them come out of their hide outs to graze and hunt. Also note that the Nile valley is one of the hottest places in Uganda and you will see animals looking for shade past 10a.m. On the wildlife conservation side, animals should be left as wild as from people and the moving cars .
The best time of the year for the game drives is during the dry season when the vegetation thins out. This allows visibility of animals even at distant locations where vehicles’ reach is restricted by the park rule of (only) driving through established tracks. Animals tend to feed from further places so early starts are always recommended. Also around this time, the tracks are more navigable. The wet seasons too have advantages when it comes to wildlife viewings; animals tend to feed from near the tracks. The disadvantage is that rains stimulate vegetation (over)growth which again conceals the wildlife from view.

Recommended cars to use for game drives
Vehicles used on game drives should be customized to offer comfort, high vantage point of view, more space, proper aeration and quite a driving experience through the rough game tracks. Any spacious 4×4 safari truck/vehicle with a pop up roof and wide clear windows is good enough for a great game drive experience although the most preferred is a safari land cruiser. There are vehicles for hire at the park and some lodges just incase your vehicle is not strong/fit enough for the rough game trails. They are hired at not less than $100 per game drive. When you book the Murchison Falls Trip with Jungle Escape Africa, you have the best vehicle for the game drive and other park activities.

Game drive rules and regulations
Conformity to the park rules is vital at all times. Whereas the rules are primarily for ensuring conservation of wildlife, observing safety precautions can limit any dangers near wildlife. They include:

Night game drives in Murchison Falls National Park
Night game drives give a clear insight into the jungle and animals’ behaviors at night besides betraying the elusive nocturnals. Night Game drives start at 8.00pm in the company of an armed park ranger with a spotlight torch. As other animals rest away the night, Leopards, Porcupines, Hyenas, Mongooses, Lions and Bush babies can easily be spotted actively hunting. Hippos too, are nocturnal grazers that can be spotted at this time or very early morning as they troll back to the water areas. Amazingly, animals tend to welcome the light of the day with their distinctive calls but quietly disappear to their hide outs after their last meal in the evening. The beauty of making both day and night game drives is the prospect of widening your game sightings. Night game drives in Murchison Falls National Park are guided unlike day drives, and have to be booked through the park’s UWA offices.

Other things to do at Murchison Falls National Park alongside game drives
There are many possibilities for this park to create a memorable experience for the visitors. Apart from Game drives, the boat cruises on the Victoria Nile to the Murchison Falls base or to the Albert Delta will put you right at the heart of nature. Wildlife adventure is always at its best with the full sight of the bottom of Murchison falls, animals grazing at the river banks, hippos playing in water, crocodiles, birds and the sunset views. At Kaniyo Pabidi area of Budongo Forest Reserve, Chimpanzee trekking, forest walks and bird watching shall greatly complement your Murchison falls game drive experience. Last but not least is the exciting top of the Murchison falls excursion for the bewildering spectacle of the world’s strongest waterfalls.
Other places for game drive experiences in Uganda include the known savannah parks of Queen Elizabeth National Park, Kidepo Valley National Park and Lake Mburo National Park. Bwindi Impenetrable and Kibale National Park are primarily primate viewing parks; for the Mountain Gorillas and Chimpanzees.