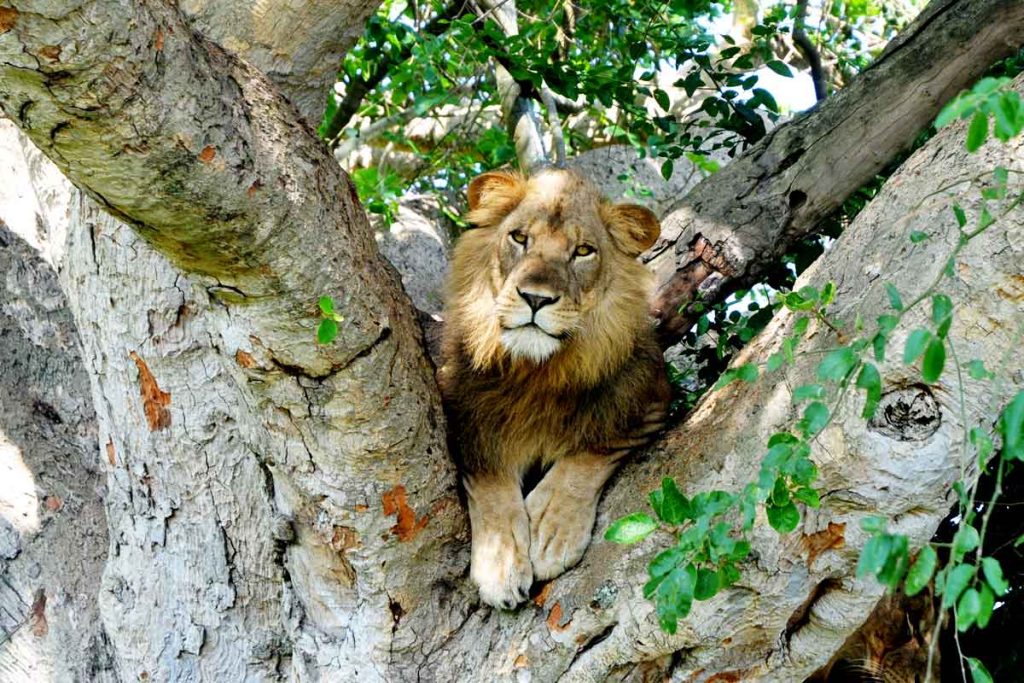 Request a Quote
Tree Climbing Lions in Uganda can be spotted at Ishasha, Queen Elizabeth National Park’s southern sector. These climbing lions are special and unique because lions elsewhere are not known to climb trees. Viewing these big cats resting up in the trees leave one wondering how they manage to climb to such great heights! Such and many other rare wildlife experiences are what sets a Uganda Safari Tour apart. In the lion’s natural history, there is no physical adaptation for the tree climbing habit apart from having claws like other cats such as the leopards that can’t take any one by surprise when viewed climbing a tree with much ease. With the sights of lions climbing up the trees, lazily hanging and sleeping on the tree branches or even pouncing down, Queen Elizabeth National Park is indeed a ”Medley of wonders! Furthermore, tree climbing lions are an important element of Queen Elizabeth National Park’s wildlife and have immensely contributed to its popularity where it even came to be referred to as the ”Home of the Kazinga Channel and Tree Climbing Lions”.

The reasons for climbing trees by the lions in Ishasha can or should be taken in the behavioral adaptation but not in the natural/physical adaptation context because there seems no scientific research evidence to support such. It is speculated that Ishasha lions climb trees:

For whatever reasons that these lions adopt tree climbing, we are good to assert that this is a generational habit until a thorough research to establish their climbing trends is done. In this case the above reasons can be weighed down on grounds that there are lions in much hotter areas than Ishasha but they do not climb trees to escape the heat. And of course irritating insects are everywhere in their jungle habitats but still lions in other areas do not climb trees.

On an individual/personal thought; it could be that those lions in Ishasha are naturally climbers, a trait they may have adapted to by virtue of their strolls through the Virunga forests. They reach Ishasha through a wildlife corridor stretching from the Virunga forests in Congo to Queen Elizabeth National Park, Kibale National Park up to Semliki national Park. Please note however that there are no lions in Kibale Forest and Semliki National Parks.

Where else in Africa can Tree Climbing Lions be sighted?

Elsewhere in Uganda, particularly in Murchison falls and Kidepo Valley National Parks, lions have occasionally been spotted in trees. However, it is mainly the cubs and the lionesses but not the males. Also in Queen Elizabeth National Park in the north at Kasenyi, lionesses and cubs have been spotted in trees but still not a full pride like in Ishasha. Of recent, some male lions that are believed to have moved from Ishasha, were spotted up in the acacia trees in the northern sector of Queen Elizabeth National Park. This takes us back that tree climbing is a generational habit which is to be carried on for other generations of lions to come regardless of where they are but at the moment, Ishasha remains as the best place in the world to see tree climbing lions.

The best time to find them is during the dry months of June to mid-September and December to February. Although chances on them are very high at almost 90% in the dry months, these lions can be viewed any time of the year. Other natural factors constant, tree climbing lions can be viewed regardless of the season; wet or dry. In both seasons, there are some factors as discussed above that propel them to climb. In the dry season, the heat on the ground forces them to chase for cool breezes in the raised heights. In the wet season, the many flies and insects/ants with their irritating bites plus the wet grounds, they will have to climb up in the trees as a way of escaping from such. One can therefore visit any time of the year.

The best time of the day to see lions in the trees should be from mid-morning until late evening. They do not climb so early before the irritating dew on the trees dries up. Also it’s obvious that the dew makes trees slippery hence not easy to climb.  These lions do not sleep in trees, so rule out the night visits and neither do they stay up when it’s raining.

There are no such distinctive visible features possessed by those in Ishasha that other lions do not have. They are neither distinctive in size.

They climb fig trees and acacias which dominate Ishasha plains. Acacia and fig trees have flat shady canopies and atop them, you can find lions comfortably seated or resting, if not enjoying the shade in the branches slightly below. Also common to these trees is that they spread their branches at lower heights which perhaps reduces the level of difficulty with which they may climb, if it wasn’t the case. Those spotted in the north of the park are usually on Cactus and acacia trees, as well. The few in other parks like Murchison falls tend to be on Sasuge trees, baboon apples and acacias.