Lion Trekking and Research in Uganda 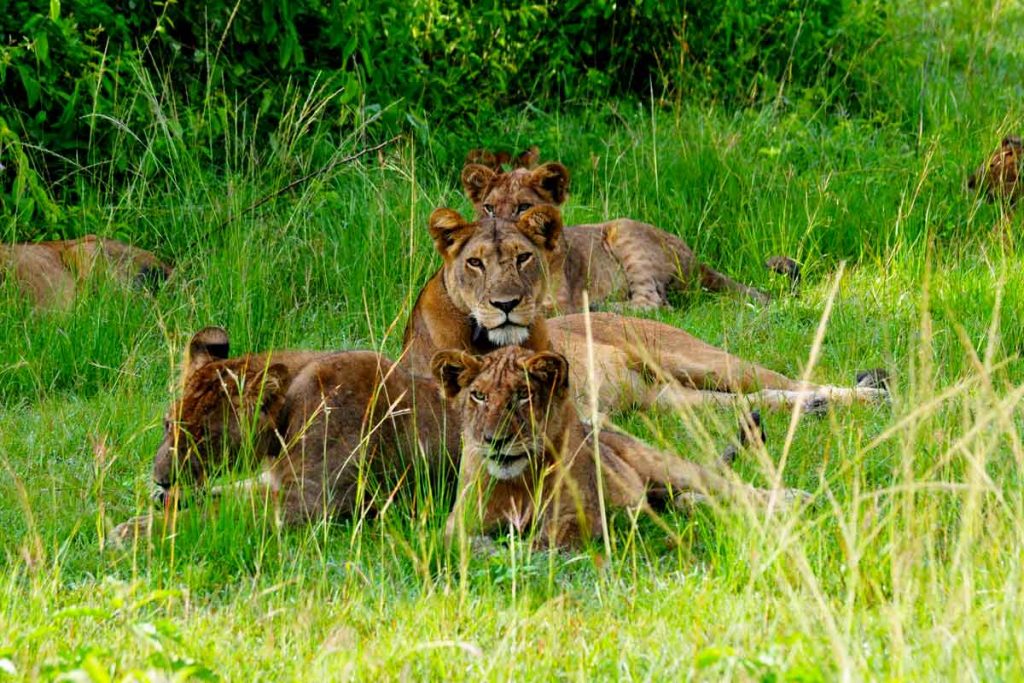 Request a Quote
Lion tracking and research in Uganda is offered in Queen Elizabeth National Park. Away from the usual tracking expeditions for primates and Rhinos, Lion trekking is another rewarding and very unique safari experience not to be missed on a Uganda Safari Tour. Doesn’t it sound beautiful to know that you can as well track the King of the Jungle in its natural habitat?! On top of the Gorillas, Golden monkeys, Chimpanzees and Rhino tracking adventures which are undoubtedly known to give visitors those great and life-time experiences, we are also considering an off-the-beaten-tracking experience known as the Experiential Lion Tracking done(only) in the north of  Queen Elizabeth National Park.

Experiential Lion Tracking is a non-profit research project by the Uganda Carnivore Program(UCP) which was established to protect predators in Uganda’s national parks with its base in Queen Elizabeth National Park. They are some of the projects established to ensure that lions don’t go into endangerment and subsquent extinction. Uganda Lions are greatly threatened and endangered which has seen their population continuously reducing for the past 20 years or so. The UCP is part of the research team under the Uganda Wildlife Authority dedicated to monitor, carry out research and conserve predators in Uganda. At its initial establishment, the Uganda Carnivore Program(UCP)’s scope of work was in the conservation and protection of lions but later it expanded to include other predators like the hyenas and leopards.

UCP together with the Uganda Wildlife Authority has a community outreach program through which human-wildlife conflicts are addressed. It ensures that the communities around the park live in harmony with the wildlife.  Remember Queen Elizabeth is a Bio-sphere reserve where man is a key component of the ecosystem. It has 11 fishing villages whose people once lived here before gazeting it as a national park in 1952 and so declaring it as a biosphere reserve in 1972, was one of the ways to avert the consequences of the conflicts that would have risen should the people have forcefully claimed back what used to be their land. This would obviously imply attacks on the park’s wildlife up to depletion. Moreover, the ever increasing population of these communities has had a lot of pressure on the park’s land which has eventually limited the animals’ habitable space. In the end, animals have also tried to claim what used to be their space when they feast on cattle and other animals in the community, if not, the humans.

To ensure that man lives together with animals in harmony, a lot of community sensitization has been done and where it has been weakened, by the community of course, tracking these predators is the option and which seems to be effectively paying off. Lionesses specifically, are placed with collars connected to radiation locators which the research team uses to monitor all their movements with in and outside the park. In circumstances where they get a signal of lions meandering off their hunting areas or getting close to the communities, the team acts so fast to have them back into the park. Any physical danger/threat to them or their cubs is easily detected by the tracking system. The same monitoring technique is used in other national parks like Kidepo Valley and Murchison Falls where lions are, but tracking by visitors is exclusive to Queen Elizabeth National Park.

Lion Tracking as a Tourism Experience

We highly recommend including lion tracking added on to your Uganda safari because of the benefits that come with it; Wildlife-human conflicts are resolved, lions’ population increases as potential risks to their lives are minimized despite being wild hence sustainability, joining lion researchers on their mission is not an everyday or easy to get opportunity and it’s a sure way to break away from the ordinary tourist you may always have been. Additionally, engaging in lion tracking is an excellent choice for those who would love to have one such experience with less crowds. Apart from Lion Tracking, your tour to Queen Elizabeth National Park can involve; game drives in the park to see many other animals, Chimpanzee tracking in Kyambura Gorge or Kalinzu forest, bats and python caves tour in Maramagambo Forest, Ishasha tree climbing lions, bird watching, crater lakes tour and cultural encounters. Another quick reminder is that Queen Elizabeth Park is located between the Gorillas and Chimpanzee parks of Bwindi Impenetrable and Kibale Forest, respectively. A trip can be tailored to include any tour of your interest.