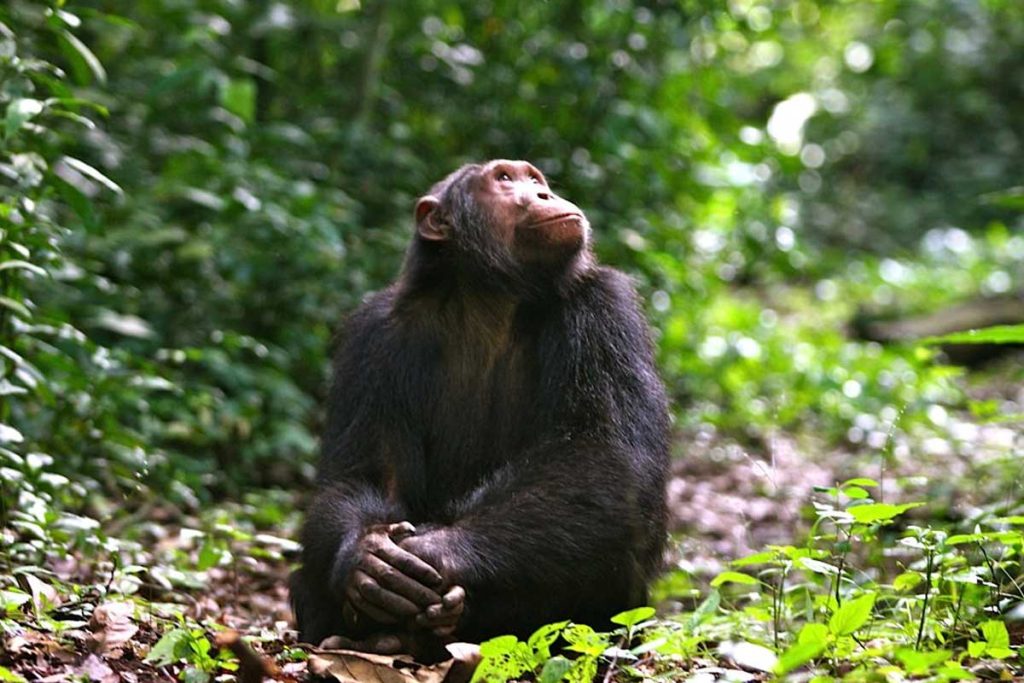 Kyambura/Chambura Gorge, named after River Kyambura that winds through this ravine, has one of the best views in the world and it is not hard to attest. There is that breath taking and panoramic view of the lush forest with in this gorge for miles and miles while at a viewing platform. Kyambura Gorge is situated in Kyambura Game Reserve in the far Eastern part of Queen Elizabeth National Park. It is an incredible feature formed as a result of a volcanic eruption that occurred many years ago. It is mostly visited for Chimpanzee tracking, bird watching and nature walks.

The flora and fauna in this gorge is flourishing and so full of life courtesy of River Kyambura and the smaller streams from Bunyaruguru and Buhweju hills. Its thick underground forest with fruit trees and other flora attract primates, birds, the herbivores, among others. By its incredible primate populace, Kyambura is referred to as ‘the Valley of Apes’. Although the habituated Chimpanzees are not more than 20 individuals, Kyambura Gorge nevertheless stands as the only place in Queen Elizabeth National Park with Chimpanzees. Other primates in this gorge are the Black and white Colobus monkeys, Olive Baboons, Blue and Vervet monkeys. Apart from Primates, in this gorge are; elephants, hyenas, buffaloes, Bushbucks and an assortment of smaller fauna. It is connected with Kazinga Channel by a long stretch of a lush swamp and across, you can hear the booming honks of the hippos.

Furthermore, Kyambura Gorge forest is another hotspot for bird watching in Queen Elizabeth National Park and Uganda at large. Your Uganda bird watching tour should atleast include Kyambura to tick the Great honey guide, Sulphur breasted bushrike, African creck and the Shining Blue Kingfisher, off your checklist as they are common and easily spotted in this gorge. By the adjacent savannah habitat of the park, Kyambura attracts more bird species apart from the forest ones. Other birds registered here include the African Skimmer, Papyrus Canary, White Tailed Lark, Chapins Fly catcher, Papyrus Gonolek, Vereux Eagle, the Greater Flamingos, and others.

Chimpanzee trekking at Kyambura Gorge is in two sessions; the morning which starts at 8.00am and the afternoon one at 2.00pm. Nature walks however are preferably done in the morning and evenings.

A Chimpanzee tracking permit for Kyambura is at 50 US dollars and all permits are secured through the Uganda Wildlife Authority/Queen Elizabeth Park offices at Mweya. They are always available even without prior booking although it’s advisable to secure them in advance when expecting to track during the peak season.

Much like Gorilla trekking and Chimpanzee tracking in the respective destinations in Uganda, the number of visitors to this small group of Chimpanzees is restricted to a maximum of 8 per session.

Briefing for Chimpanzee tracking takes place at the trek starting point which is an hour away from the park offices. You may necessarily not need porters like during Mountain Gorilla Trekking except a walking stick. Also be informed that all activities in Kyambura gorge are conducted by the park staff who include the knowledgeable rangers/guides.

For your Chimpanzee tracking tour in Kyambura Gorge, you should wear trekking shoes with a firm grip, long sleeved shirts/tops, waterproof pants, have a rain coat with you, an insect repellent, a round hat with a bigger grim, binoculars, a camera, among other personal items. Carry enough drinking water and packed lunch or a snack.

Your Chimpanzee trekking experience in Kyambura can be combined with other tours that Queen Elizabeth National Park has to offer; a boat cruise on Kazinga Channel, game drives including those for tree climbing lions in Ishasha, lion trekking, bird watching and the community visits near Lake Katwe. Outside and close to Queen Elizabeth National park are the Maramagambo and Kalinzu forests with a lot to offer to in terms of wildlife sightings.

What are the chances of finding Chimpanzees of Kyambura Gorge upon tracking?

Chances of finding Chimpanzees in Kyambura Gorge are not as high as for Kibale National Park and Budongo Forest in Murchison Falls National Park, and further lower than the nearby Kalinzu forest. Infact Chimpanzee sightings are not guaranteed here at Kyambura Gorge because among other factors, their numbers are too small and given their high mobility and activeness, they tend to elude the trackers some times. It is in this regard that for our Chimpanzee tracking and Wildlife tours to Queen Elizabeth National Park, we at times do the tracking in Kalinzu forest after prior knowledge from the park staff of a probable flop in our search for them. However, fact remains that nature is never predictable so our visitors have an opportunity of keeping it Kyambura Gorge or go after the suggested alternative of tracking Chimpanzees in Kalinzu Forest. Also besides the chimpanzees, there is a lot to experience in the Kyambura gorge above which is the most rewarding nature walk in such a place of unspoiled beauty.