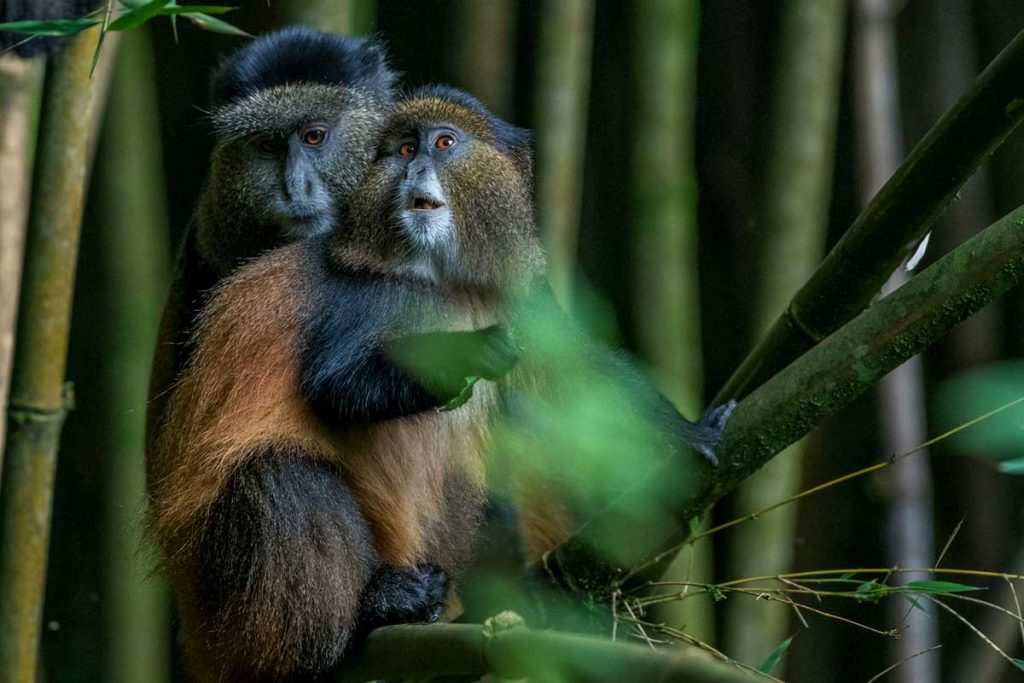 Request a Quote
Mgahinga Gorilla national park is located in the south western part of Uganda in the district of Kisoro bordering Rwanda and the Democratic Republic of Congo(Congo). It is Uganda’s smallest national park sitting on an area of 33.7Sqkm and lying at varying altitudes of between 2227m and 4127m. It was gazated as a national park in 1991 to protect the endangered Mountain Gorillas and the Golden monkeys. Mgahinga Gorillas Park is part of the large Virunga Conservation Area (VCA) together with Congo’s Virunga National Park and Rwanda’s Volcanoes National Park.

The name Mgahinga comes from a Kinyarwanda word “Gahinga” translated as a pile of volcanic lava stone heaps in which cultivation is done.  Mgahinga Gorilla National Park actually stands as Uganda’s portion of the VCA. The park consists partly the forested slopes of the 3 extinct Virunga volcanoes: Mount Muhavura, Mount Gahinga and Mount Sabinyo with altitudes of 4,127m, 3,473m and 3,654m, respectively.

What to see and do in Mgahinga Gorilla National Park

Mgahinga Gorillas park is a small but very impressive wildlife park. It is actually an enchanting nature’s work of art! Mgahinga Gorilla National Park is encompassed by magnificent beauty of the scenery formed by Lakes, Rivers, the volcanic mountain views, cool weather and the smaller green hills. It habours a variety of wildlife which include the endangered Mountain Gorillas and Golden monkeys, forest elephants, buffaloes, bush bucks, Golden cats, side stripped jackals, duikers, among others.

Activities that can be done include, Gorilla trekking, Golden monkey tracking, hiking to the 3 extinct Virunga volcanoes(Muhabura, Gahinga and Sabinyo), cultural encounters, nature walks, birding and tracking down some of the 76 animal species in this park besides the Mountain Gorillas and Golden monkeys.

It is the only place/national park in Uganda sheltering the endangered Golden monkeys. Mgahinga is most famous for the Golden monkeys although Gorilla trekking is for the most part the main activity. Golden Monkey tracking is a definite highlight but a different experience from mountain Gorilla trekking that one shouldn’t miss.

The only remaining 4000 Golden monkeys in the world can be found nowhere else apart from Uganda’s Mgahinga Park, Congo’s Virunga Park and Rwanda’s Volcanoes National Park. They are endemic to the bamboo forests of the Virunga Volcanoes. These extremely lively monkeys are fascinating and fun to watch. They keep bouncing from tree to tree, getting out and suddenly disappearing in the bamboo thicket as if to tease the visitors. They are very playful and are sometimes seen jumping over the visitors. They are now more used to humans due to habituation.

The park has only one Gorilla family – Nyakagezi with 9 members. Before Nyakagezi finally settled in, it used to be trans-boundary, crossing over to Rwanda and Congo. Tracking it therefore wouldn’t be guaranteed then. The park can only register a maximum of 8 visitors for Gorilla trekking per day. Occasionally, the park receives migratory Gorilla families from Rwanda’s Volcanoes National Park and it’s when they can register more visitors for Gorilla trekking. Just like Bwindi Impenetrable Park, a Gorilla permit for Mgahinga is at US$700 and has to be booked in advance.

Actually the beauty of this park is majorly attributed to these 3 extinct volcanoes of the Virunga Mountains. They are a striking image that will usher you into Mgahinga Park even before making it through the gate physically. They are very spectacular and surely give an excellent optical therapy as one views them. These 3 volcanoes stand high in the sky at different altitudes but each of them can be trekked in a day and nothing is more adventurous and thrilling like reaching their summits.

Also called Muhabura, translated to mean “the guide”, Mount Muhavura reaches an elevation of 4127 metres above sea level. It is the tallest of the 3 volcanoes encompassing Mgahinga Gorilla National Park and the 3rd highest of the 8 Virunga Mountain ranges. This cone shaped volcano can be climbed in a day and it takes roughly 8 hours to do its 16km trek. While at the summit, you will be treated to breathe taking views of the other Virunga volcanoes, Bwindi Impenetrable Forest Park, Lakes George and Edward in Queen Elizabeth Park, the rift valley and Rwenzori Mountains. From the marvellous alpine vegetation on its slopes, through a rocky surface with less grass cover and small shrubs. Muhavura has a small crater lake at the top. Muhavura lies partly in Rwanda’s Volcanoes Park and here, in Mgahinga Gorilla Park.

To the locals, ‘Gahinga’ is a pile of stones in which cultivation is done and you will see quite a number of those stone piles in people’s gardens as you approach the park. The park derives its name from Gahinga though Mount Gahinga itself is far bigger than those stone piles. Mt. Gahinga lies between Muhavura and Sabinyo at an elevation of 3473m ASL. Its hike takes 6 hours(round trip) through pure bamboo forest upto its summit where you will find a beautiful swamp which used to be a crater lake way back.

Sabinyo comes from a local Kinyarwanda word “sabyinyo” meaning the old man’s teeth. Sabinyo’s peaks have been eroded with time leaving its jagged top appear like worn old man’s teeth in a gum line hence the name. Standing at 3645m Above sea level, Mount Sabinyo is the most challenging to climb of all these 3 volcanoes in Mgahinga Gorilla National Park. Mount Sabinyo hike takes 8 hours(round trip) to all its 3 peaks. One of the most exciting moments about this challenging hike is reaching an adjoining point for the boundaries of the 3 countries (Uganda, Rwanda and Congo) that share the Virunga volcanoes of which Sabinyo is part.

The forested slopes of Mount Sabinyo, Gahinga and Muhavura are habitats to the Mountain Gorillas, Golden Monkeys, many birds, animals and other wildlife species recorded in this park. You can combine your Gorilla or Golden Monkey trek with a hike to one or all these 3 volcanoes in Mgahinga Gorilla National Park.

Mgahinga Gorilla National Park is a place of unique avi-fauna. The park has a 79 bird species record, some of which are endemic to the Albertine Rift Afromontane region. Notable bird species in the park are; the Rwenzori Turaco, White-necked Raven, Crowned Hornbill, Grey capped Warbler, Black Kite, Ibis, Paradise Fly Catcher, among others. Bird watching in Mgahinga Park is an all-year-round activity though the best times would be April to May and mid-September to November.

There a simple but very rewarding 1 hour walk into the park conducted from Ntebeko park offices to what they call the viewing point. It is a few meters from the park gate and it has a platform on which to stand and view the whole of the park and its adjacent lands. It commands very great views of the 3 volcanoes, Lake Mutanda, Kisoro town, among others. During the walk, you can have some wildlife encounters like for the duikers, buffaloes, elephants as they walk to and from the nearby water stream. Their hoof prints with in this trail are a common sight.

The Batwa just like the Gorillas and Golden Monkeys are also endangered because their culture, identity and language are increasingly under threat. Mgahinga forests are one of those they used to call home before they were evicted to gazette them as a national park in 1991. Traditionally, the Batwa are hunters, plant and fruit gatherers. They have interesting stories of how they used to survive and share habitat with the Gorillas and other wild animals for many centuries. During the Batwa experiential trail, the (Batwa) guides take visitors through how they used to survive in the forest, their hunting and fire making skills, honey extraction, health/disease management, the traditional dances and a lot more. It ends with a visit to the Garama cave which used to be the ancestral palace for their king.

The weather in Mgahinga Park

The weather in this park is greatly influenced by its varying altitude. Generally, the temperatures are low and it is arguably the coldest place in Uganda. Temperatures can drop up to 7 0C at night while the day can warm up to 20 0C. The best time to visit is during the dry months of June to mid-September and December to February when the trails are less slippery. However, you can still plan to visit any time of the year because we can no longer give a guarantee for those particular months to be dry or wet due to global changes in weather.

Tours to Mgahinga Park can be planned to start from either Kampala/Entebbe(Uganda) or Kigali(Rwanda). It takes between 9 and 10 hours on the road from Kampala or Entebbe. It is an interesting and exciting journey punctuated by stops for scenic views and cultural encounters. From Kigali, Rwanda, it takes only 4 or 5 hours on the road to get to Kisoro or Mgahinga Park via Chanika border point.

Also be informed about the availability of scheduled flights between Entebbe and Kisoro. Charter flights can as well be arranged from Entebbe to Kisoro. Flight duration is one hour each leg.

Depending on one’s budget, there are many lodge and hotel options close to the park and with in Kisoro. Some are listed here: